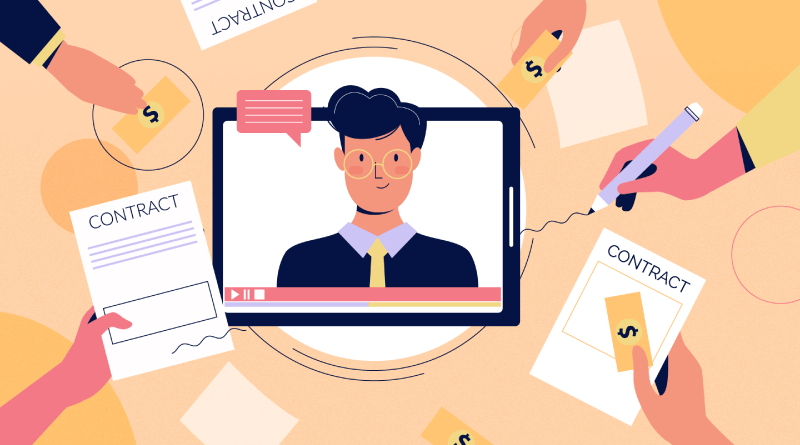 Ever since Covid-19 struck, hiring managers have had to think creatively about how to streamline their interview processes. With traditional face-to-face meetings on hold, the solution for some has come in the form of asynchronous video interviews, or AVIs, in which applicants film themselves answering a predetermined set of questions, with no human interviewer present.

In some cases, these recordings are then evaluated by a hiring manager, in others artificial intelligence and facial analysis software are used to assess candidates. Companies report that this type of interviewing can make the hiring process more efficient, but for some applicants, this job screening method − which may feel like a one-way Zoom conversation – can be uncomfortable.

But the growing trends of vlogging, Tik Tok’s etc younger generation is becoming much more comfortable and at ease in doing pre-recorded video interviews.

The Intent behind Asynchronous video interviews i.e Pre-recorded videos is that it will help the recruiter to ease their hiring process. This will not burn you out by doing back-to-back calls all day. You can watch their interview anytime and at your own pace/comfort level.

As most companies now know how efficient it is to have virtual hiring than in-person meetings, job seekers in manufacturing, retail and other industries are more likely to find themselves chatting with a bot at their next interview. Adapting to this format and understanding how to maximise the chance of a positive interview could be key to a successful job hunt.

Even before the pandemic, AVIs were being used as the first stage of recruitment in the healthcare, pharmaceutical, tech, business and finance sectors. For large organisations with a national workforce of lower-skilled positions, AVIs have become a convenient way to skim through hundreds or thousands of applicants at a faster rate.

If we travel back to a decade ago, only about 10% of top-positioned businesses had adopted any form of video interviewing; the majority preferred an initial telephone assessment and an in-person interview to follow. But as technology matured and smartphone usage expanded – making it easier for candidates to use the software no matter their location − many companies are taking a second look at video interviewing as a whole, including the use of AVIs for initial screenings as they’re able to get the assessments out more quickly to a wider range of candidates.

Hiring managers using this software may see multiple benefits, but for applicants using an AVI for the first time, the transition may feel strange.

One major difference is the timing of the interview itself. Rather than scheduling an appointment, the applicant can sit in front of their computer or phone to record their answers whenever they are free. If their day is filled with work, childcare or other duties, they can schedule the interview during a suitable break.

When they begin, they are prompted with a series of questions, often displayed in plain text on the screen, such as: “Introduce yourself, and tell us a bit about your background and experience” or “Describe your most recent holiday, and what made it special”. Depending on the platform and the position they’re applying for, they might also be asked to perform small exercises or play a game – activities that can test their ability to multitask or brainstorm on the fly.

When candidates submit their interviews, their recordings are processed in one of two ways. The hiring manager can opt to receive the videos directly and evaluate them without the use of any further technology, or they can be run through a complex AI system which assesses facial and linguistic information to determine how well candidates compare to previous successful hires.

There are challenges; AVIs can vary in the amount of time allotted for each answer, and not every programme will give candidates unlimited preparation time or allow them to re-record a section if they are unhappy with their first attempt. Applicants also won’t be able to ask any questions about the company they’re applying to, unlike a standard interview, and poor internet connections or blurry webcams can cause trouble for applicants wanting to make a good impression. Then there’s the fact that candidates don’t know exactly how their interviews will be evaluated.

Recording a video monologue can be particularly hard for some candidates who are not speaking in their native language as they worry they could be penalised for mispronouncing a word or bungling their grammar. And when it comes to how the interview is assessed, there is the issue of AI algorithms tainted with the same pre-existing hiring biases as their human counterparts.

Showing your best self

Yet if this kind of recruitment method becomes more widespread, understanding how to speak well into the void could become a key element of a successful job hunt.

Experts say that before pressing the record button, it’s important to plan for questions that could come your way. There’s no room for improvisation or pleasantries during an AVI, and answers need to be efficient and to the point.

Just like in a standard interview, being confused by a question or not having much to say can reflect poorly on a candidate. And because of the highly structured nature of AVIs, candidates won’t be able to ask for clarifications.

Candidates should be themselves. Trying to squeeze in too many references to your qualifications or keywords that applicants think might win favour with an AI can appear insincere and harm your overall performance. Applicants should assume their recordings will be judged by a fellow human and apply the same courtesy as in a normal conversation.

By staying calm in front of the camera and embracing the one-sided nature of the format, job seekers can give themselves the best chance of success.